More than 5 years without climbing! Sounds strange, but it's reality.

Family circumstances have led me to hang up my climbing shoes. For almost 6 years no climbing, no bouldering, no rock, no hard moves, purely nothing... ok.... biking, babysitting, chilling and many other things of course, but no climbing. I had no motivation anymore, no desire, had not missed climbing in any way. I even assumed that it would remain, but for a few weeks I am now climbing again something. Once a week, in the hall with friends. The persuasion of good friends has shown effect.

I don't want to resurrect this blog, but I would like to publish a few videos, which I wanted to put online for a long time. Not because people need to see this (lol), but because people have asked me about it. ;)

Specifically, it's about some first ascents in Blattiswald. They are a few hard and really super nice lines for which people kept asking for information. Let's see... maybe I'll draw a topo for this bloc, but at least you'll find the videos for the most important two lines now (Hemera 8A and Amun-Re 8A+).

see you out there...

Posted by Ronny Birchler at 11:33 PM No comments:

So... now it's slowly getting too warm at Murgtal. The last day I went there i had overt 20°C on the lower sectors. In the morning and up on the sector lake it was about 15°C. Ok for some climbing, but still far away from good conditions. I think I'll devote myself to new areas again until the fresh coolness returns to the "Valley of Murg".
On to the Sustenpass and surrounding areas...! ;)

Some days ago I managed to climb the new line "Minor part, 8A+". Even that day I had 20°C... but the line hiding between two big boulders and is the whole day in the shade. At least the rock was quite cold - not me ;) - so I could climb the line pretty quickly. Luckily...!! I would have not had enough power for a third attempt this day.

The next day then I had a look to "Flanagans, 8B".... but since days now it's coming too much water down the stream and it's not possible to cross it. But... it probably makes sense to wait for autumn anyway!!

What could I do otherwise? Sure... let's have a look for new lines!!!
Recently I noticed a boulder, i've never seen before. It's close to the sector lake... a wonderful high boulder which offers some good lines. The day I saw the boulder I just had a short look to it. But now it was time to put on the shoes. ;)

The boulder had already magnesia on the holds... therefore someone tried or did it already. I managed to climb two lines on it. "Dreamtheater, 7B+" and "Access denied, 7C". Both are highly recommended and very beautiful lines!!


Later I saw that both lines have already been climbed... but not topped out. As I topped out them, I already thought that these were first ascents... just because of the fact, that I haven't seen any signs that someone was up there before. The forest facing side of the block is completely overgrown with moss and it is impossible to come down there, leaving no trace in the moss. Anyway... the topout makes sense and completes the lines, but it is not necessary (quite easy) and pretty high too.

Posted by Ronny Birchler at 2:19 PM No comments:

Three weeks ago I was able to climb one of my favourite "must do"-boulders... "Bourguignon, 8B".
I really like this brute bodytension style!! ;) Since about two years I wanted to climb it... but either it was not possible to cross the stream (too much water), or I just had other projects. This year now the stream was already dry in spring, what's pretty unusual. Good for me ... so I could finally take the horse by the bridle and after four days it was also tamed. :)


The same evening I tried a new project in the back of "Bourguignon". I had already a look to this boulder some days ago... but now the boulder was completely cleaned. When I arrived a couple of guys just left the area. I'm pretty sure that these guys have cleaned the boulder. It would be interesting to know, if they've climbed something on it. There is no arrow or any other sign on the boulder.
Anyway... that evening we tried a sitstart, started with both hands at the low undercling. It is definitely possible to climb that thing. We did all the moves except one... so no success so far.

A few days later I had a look to Guntrams new boulder "Cosmic chaos, 8B/B+". It's kind of an extension to the existing "8A-shield" in one of the lower sectors. The idea to climb the whole shield is not new... I discussed this already last year with a friend of mine, but I never started to work on it. Now it's done and we got a beautiful new testpiece in Murgtal. Congrats GU...!!! Nice one!
I checked out all the moves, climbed all the different sequences and now I just have to go for it. It's not that hard... pretty long (about 18 moves), yess... and very steep... but also very homogeneous without extremely hard moves. A "must do", if it's in your reach!!!

Next "project" was a one week trip with my whole family to the "Gardasee" (lago di garda). My parents invited us (me, my two children, my girlfried and my sister with their children) for that vacation. MANY THANKS FOR THAT...!!!! We had a great time down in Italy and were lucky to have six days of perfect weather!!!

Luckily it was over with the rain the week after and Murgtal started to dry. It was my first climbing-day after two weeks break and I went for the unknown line "John Rambo, 8A". It's an awesome boulder up a pretty steep edge. Despite (or because of!?) my break, I was able to make a "turbo-ascent" of this hidden pearl. 5 minutes warmup to check out the moves... 10 minutes break and then the ascent at my very first try from the sitstart. Cool...!!!! The shape seems to fit! :o)


Next one was "Flanagans, 8B". There I met a couple from Austria with their nice little dog "Caramel". Forian worked on Flanagans with me and both of us had the same problem with the first very very hard tesion move with a hold for your left (shoulder) and the foothold far right. You're almost hanging horizontal in the wall... completely stretched... and have to push your body up to an undercling. It's possible for sure... but I'll need some days to get used to that brutal move. The rest would work...

Florian told me about a new line from Fabian Christof, which is close to my route "Taurus, 8A". The line is called "Minor part, 8A+"... a hard traverse with a crunchy crux in the middle. The rest is homogeneous... but always very exacting.
Yesterday I gave it some tries... but I had such strong muscle soreness from my attempts in "Flanagans" that I was just not able to hold on for more than 20 seconds. Especially my left forearm ached extremely!! After I longer warmup it went better... and at the end of my session I was able to do all the moves (I counted 28 of them!!!!) and climbed the line in two sequences. At least good prospect for the next day of climbing...!! But first of all I need a few days without any strain... just relax and recover!!!! ;)

Some days ago I cleaned and climbed a new boulder in the Entlinge-sector. It's a really really NICE faceclimb (shield), comparable to Fred Nicole's testpiece "L'ombre du vent, 8A+"... just a few grades lower. ;)
The line is pretty high... but luckily the tricky moves are the very first ones and the last moves up and with the topout are quite easy.
I called the line "Scarface, 7A". It's somewhere between 6C and 7A+... no idea.


Posted by Ronny Birchler at 3:51 PM No comments: 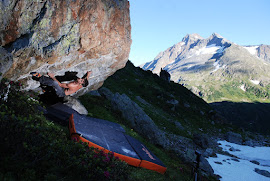 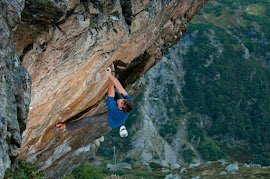 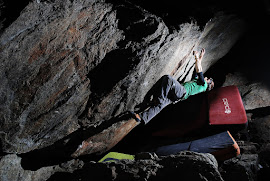 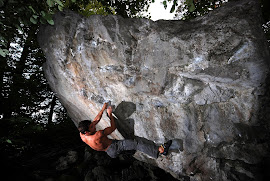 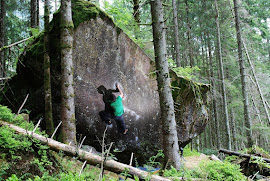 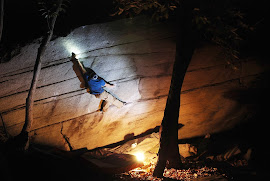 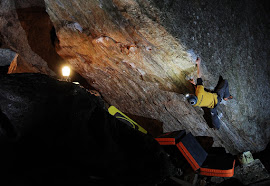 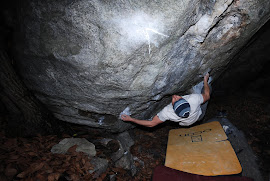